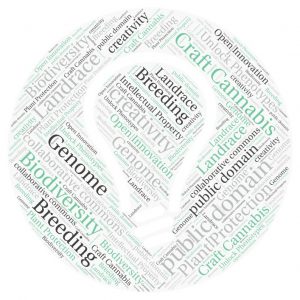 Strainly‘s goal is to foster the preservation of cannabis genetics and phenotypes with an inclusive community spirit. Breeding is the manifestation of passion, creativity and hard work. Breeders should find achievement and reward in playing a key role in the conservation and evolution of the plant. Cannabis Intellectual Property is becoming a sensitive topic among breeders. But now that we are a bit more familiar with the concepts of “plant protection” and “public domain”, we should be able to execute on a strategy to protect biodiversity and breeders’ interests.

In our previous article, we covered the principles and mechanisms through which a breeder can be granted exclusive rights over a cannabis cultivar. We also described what are the implications of being granted exclusive rights over a cultivar. We believe that preserving cannabis biodiversity should be a priority for the cannabis community/industry as a whole (as opposed to a “hole”…), and that breeders should make informed decisions when it comes to protecting their own strains.

WILL HISTORY REPEAT ITSELF?

With legalization, cannabis could follow the same route as the rest of agriculture, a route toward monoculture, centralization, and restrictive patenting. There’s a number of documentaries on the issue.

Today, crops available to farmers and to the public are a lot less diverse and abundant than they used to be in the 1950s. Most fruits, vegetables and cereals that are consumed in western countries nowadays (and ever increasingly across the rest of the world), are grown from patented varieties or cultivars. Many of them are GMOs, particularly when it comes to cereals/grains.

Though levels of restrictions on seeds vary from a geography to another, a large number of heirloom varieties have been phased out of the market across many countries. Seed laws may only allow you to grow public domain cultivars for your own consumption…provided that you are able to find the propagation material.  Where there were hundreds of (heirloom/public domain) cultivars of tomatoes available, there are now a couple dozens patented tomato cultivars available and legal to propagate in geographies enforcing restrictive seed laws.

WHAT IT MEANS FOR CANNABIS

It goes without saying that it is extremely critical for the cannabis community to collectively take care of public domain strains to avoid facing a similar situation a few decades from now. Given the persistant stigma around cannabis, groups of lobbyists may find it even easier to convince law-makers to ban public domain strains, in the name of “public safety”, claiming that “engineered and patented cultivars are indeed safer for the public”. We can’t say we didn’t know.

As this article is being written, both the Canadian Food Inspection Agency and the US Patent and Trademark Office (USPTO) have started granting patents on cannabis varieties. There is no reason to expect a different outcome than what we observed for other crops. Patented crops are usually going hand-in-hand with monoculture, chemical intensive techniques and dependence of farmers toward the seed companies. Patented crops are mostly serving the holder of exclusive rights over the cultivar.

According to the Open Cannabis Project (OCP), patents in the world of cannabis are a disaster:

“The first cannabis patents issued by the USPTO are the kind of overly broad patent protection that kills innovation instead of incentivizing it. They’re called utility patents, and they don’t cover single varieties: they cover huge categories of cannabis. Which means that just a handful of such patents could potentially lock up all of cannabis.”

What should we Do?

Whether in Canada, the US or any member country of the UPOV, patent offices and ministries of agriculture (e.g. the USPTO, USDA, CFIA and their equivalents in other countries) can’t legally grant patents that would cover existing cultivars (i.e. public domain cultivars), BUT,  there has to be proof that they exist! According to the OCP, “we can block this process by providing this proof: documenting genetic and chemovar data for all of the cannabis varieties in existence today”.

the public domain, a safe haven?

reminder of the basics

Remember, the owner of a (cannabis) cultivar can be granted  a Plant Variety Protection (US) or Plant Breeder’s Rights (Canada) if it can be demonstrated that the variety is:

As we mentioned in Part 1, the vast majority of existing cannabis cultivars doesn’t meet these criteria and is therefore in the public domain. Cannabis cultivars are in many cases not eligible for plant protection (e.g. PVP, PBR or Plant Patent) for the simple reason that they have been available to the public for more than a year (i.e. they are not new). However, there are actions you can take as a breeder if your strains are in the public domain, to avoid any frustration in the future. You should make sure that your cultivars are known in the public domain in order to prevent any third-party from “patenting” your cultivar (i.e. an overreaching PVP, PBR or Plant Patent on that strain you bred years ago…).

GETTING MY STRAINS KNOWN IN THE PUBLIC DOMAIN

The USPTO, PVPO and CFIA consult the data available on public domain creations prior to allowing plant protection on a cultivar. Until recently, there wasn’t any database for these “patent offices” to check against. But, there are now people with the same concerns as ours who decide to create such public databases to document “prior art”. Kannapedia and the Open Cannabis Project (OCP) both have their databases to which labs and individuals with test results can contribute. In addition, the National Center for Biotechnology Information (NCBI) also accepts cannabis genetic test results from testing labs. Now, when it comes to proving that your cultivar has been made available to the public for more than a year, then… Strainly is an option you should consider, since it allows you to stay in control of when and how your strains are available to third parties, relying on fewer intermediaries, while also keeping a better control on WHO gets your creations. Finally, the dated reviews you receive for your strains on Strainly, can be used to demonstrate for how long they have been made available to the public.

This part is an important one. When looking at the criteria to be met for a strain to be patentable, genotyping your cultivar may prove very helpful to secure its position in the public domain. Genotype reports will usually show the closest genetic relatives, the line stability, the population profile, identical clones, cannabinoids concentrations, terpenes combinations and more. This data will reinforce the position of your cultivar in the public domain when combined with the fact that it was made publicly available for more than a year (see above sections).

There are various laboratories that can perform such tests. However, you need to get a clear understanding of how the obtained genotype data from your plant samples will be used by the laboratory you are contracting. Such data may be used through marker-assisted breeding that will produce proprietary varietals to eventually put you out of business.

Securing your cannabis cultivars into the public domain is something we can only recommend breeders doing. Not only does it serve the interest of breeders who created strains that are over a year old, but it serves our entire community and the preservation of the genetics of our favorite plant. Bear in mind however, that while such an initiative will imply efforts and costs (for lab testing), it won’t give you exclusive rights over your strain. It will only prevent someone else from acquiring exclusive rights over your creation and reap the benefits of your work. However, once you went through the process, your strains are forever in the public domain and you do not need to pay annual fees nor renew your protection later on. Being proactive is key, since it is possible to challenge an overreaching protection over your own strain, but the process will cost you time and money.

Some breeders may consider that their new creations are worth putting the money and efforts to obtain a PVP, a PBR or a Plant Patent (potentially in various countries). Remember, PVP Certificates and PBRs imply spending several thousands of dollars to obtain and maintain associated “exclusive rights” (higher costs for Plant or Utility Patents). PVP Certificates or PBRs do not prevent anyone from infringing them, they are an entitlement to spend more time, money and efforts to track, demonstrate and fight if/when someone used your cultivar without your prior consent. They come with obligations that can be costly to meet if you’re willing to maintain your rights. Always compare the benefits and the costs when taking that route.

Finally, enforcing exclusive rights (e.g. patent or PVP) over a cannabis cultivar in the US could expose both plaintiff and defendant to prosecutions, in relation to FDA Schedule 1 drugs (demonstrations require carrying, manipulating and distributing cannabis plants). Quite ironically, both the USPTO and USDA process applications and issue PVPs or Patents for a plant that is still on the FDA’s Schedule 1.

A history of passion, trials and errors proves that it is possible to be creative and innovative in a public domain-based cannabis breeding context. A vibrant public domain genetic pool is essential to a thriving cannabis industry and community. We believe in an inclusive model where “microgroweries”, craft, small scale farmers and growers remain relevant through differentiation with exclusive cultivars, adapted to their cultivation environment and techniques. A model that empowers urban and rural communities through diversification of the crops, improved resilience and conscious practices.